Your Payment is Ready

…my algorithm finds that you are currently at the 46th percentile amongst clarinetists in your peer competition group. Practice your arpeggios to improve your score before the final evaluation! 16-year-olds in your city with finely articulated arpeggios generally rank in the top quartile. Those with a strong swing-eighths style generally rank in the top decile. Say ‘practice arpeggios’ or ‘practice swing-eighths’ for a lesson.

“Judd!” His father yelled as he walked into the garage. “Why the hell is your Clarinet-MLv2 in pieces? How are you going to make regional youth orchestra with a broken machine learning clarinet?” In-person socializing among children had become another luxury good, doled out to high achievers and those who could afford the best virtual instruction. In an age of pandemics and rolling lockdowns, his dad saw the youth orchestra as an opportunity for kids like his son to get out of the house.

“Whoa!” Judd put up his hands to deflect his father’s anger, “I can explain.” Shunting his father to the corner of the garage and away from the decomposed clarinet, he began breathlessly, “so I’m practicing yesterday like normal, getting feedback from Clarence, the clarinet’s evaluation algorithm. But I notice it just keeps repeating the same thing, in the same patronizing British accent. And I mean, No. Matter. What. I. Played. I practiced my arpeggios for two hours, and it tells me I’m 46th percentile. I play a series of high-pitched squeals: ‘Practice your arpeggios…’ I even take the thing apart and remove the analog-to-digital converter so I can feed it recordings of Benny Goodman. “You’re at the 46th percentile. Practice your arpeggios.” Judd throws up his hands in exasperation.

Listening, Judd’s dad pursed his lips and thought back to how lucky he’d felt to snag an early-model machine learning clarinet in the lottery his son’s public school ran last year. Judd had zero musical aptitude but he received one of the few instruments they had available for enhanced musical instruction. Even though the spit valve was rusted shut and the software was crude, he’d been happy to put down the hefty deposit. He looked over his son’s shoulder at the dismembered clarinet with, as the commercial advertisements claimed, “built-in machine learning software that provides personalized teaching and testing with no dangerous human interaction necessary!” He worried they might lose it if Judd was unable to put the thing back together.

Meanwhile, Judd was still speaking quickly. “So, I start digging into the software settings. I tune a few of the hyperparameters related to…” His father has no idea what he’s talking about and is skeptical that Judd does either. “…and then something crazy happened.”

His dad’s attention refocuses, and he sees his son smiling broadly.

“The company doesn’t support this model any longer, but I came across an unofficial firmware update that promised to fix some of the problems I’m having. I install it and reboot. Clarence is back to his old, obnoxious self again! I play the arpeggios I’ve been practicing, and this time he tells me I’m ranked in the top 5 percent!”

Judd looked at his father expectantly, “I think there was just some kind of buffering problem. It wasn’t capturing the new input and so the algo was slow to update.”

“Clarence even said I was eligible for a statewide scholarship!”

“Judd, that’s wonderful.” His skepticism took a sudden backseat to the prospect of reduced tuition. Maybe Judd wasn’t just fooling around out here.

“I know! They said they’d send a cheque. All we have to do is deposit it in the bank, then wire half of it to a numbered account which they’ll provide separately. That will cover tuition and I can keep the other half for living expenses.” 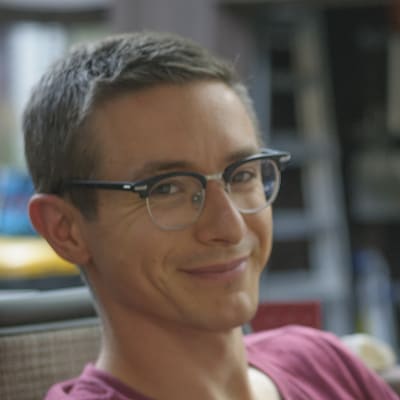 Ben is a social science researcher interested in the gig economy and the future of work. He enjoys creative writing and is curious about the potential of speculative fiction as a research tool. He grew up reading Tom Clancy and Philip K. Dick novels.